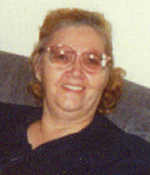 A 1969 graduate of Columbus High School, Carolyn was a homemaker and an avid reader.

A memorial service will be con-ducted at 2 p.m. Thursday at Barkes, Weaver & Glick Funeral Home on Washington Street.

Family and friends may call from 1 p.m. until service time Thursday at the funeral home.

Inurnment will be at Garland Brook Cemetery.

The family asks that memorial contributions be made to the American Heart Association.

Online condolences may be sent to Carolyn’s family at www.barkesweaverglick.com.

Born in Columbus May 18, 1949, Carolyn was the daughter of Alva and Leatha Smith Mullis.

Carolyn was preceded in death by her father, Alva Mullis; her mother, Leatha Beabout; sisters, Juanita Kinser and Luessie Hartwell and a brother, Albert Mullis.