A piece of rural heritage in an urban setting: 1800s fruit trees expected to flourish on town lot 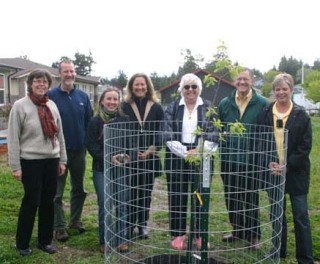 Where there once was an orchard, fruit trees will flourish again.

A sliver of land on Market Street between the Technology Center and the Food Bank is being planted as a heritage orchard — “heritage” because the trees were grown from grafts taken from trees believed planted in the 1860s near English Camp.

Many pieces came together to make the project happen. The undeveloped lot is a remnant of the Mullis property that now contains Mullis Community Senior Center, the Food Bank, the Family Resource Center, and the WSU Cooperative Extension Demonstration Garden.

The offices of Friends of the San Juans and San Juan Island National Historical Park neighbor the parcel, as does Village at the Harbour assisted living apartments.

So when the national park had heritage trees left over from its restoration of the old Sandwith orchard near English Camp, the Market Street orchard gelled.

The national park donated eight apple, pear and plum trees. The ARC and the county Conservation District provided technical and tree care advice. Davis and Marks put volunteer sweat equity into the project, planting the trees during lunch and after work. Fencing and ground cloth were donated by Rob and Terry Browne of Browne’s Home Center. Mulch was supplied wholesale by Site Elements.

A “heritage orchard” sign will be made by volunteers from the conservation district. Village at the Harbour assisted living apartments is allowing the use of its hose bibs to water the orchard and is paying the cost of water.

Marks said the orchard was dreamed up as a way to enhance the vacant lot and turn it into a green space for all to enjoy and learn from. The orchard fills several community needs: It will produce fruit for use by seniors, the Family Resource Center and the Food Bank. It will provide a community green space in an urban area of town. And it will provide a connection between island history and the growing of food today.

Marks said the project is timely: This is the Town of Friday Harbor’s centennial.

Want to feel a sense of contribution and ownership? Here’s the project wish list, according to Marks: Split-rail fencing to define the orchard and separate it from the sidewalk; fill dirt to level the site this fall; wood chips for a path; and mulch for under the pine tree.

Journal of the San Juans Editor Richard Walker can be reached at rwalker@sanjuanjournal.com or 360-378-5696.