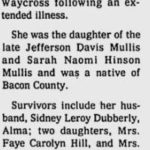 She was the daughter of the late Jefferson Davis Mullis and Sarah Naomi Hinson Mullis and was a native of Bacon County.

Funeral will be today at 4 p.m. In the chapel of Crosby Funeral Home.

Burial will be in Rose Hill Cemetery.

Crosby Funeral Home of Alma is in charge.