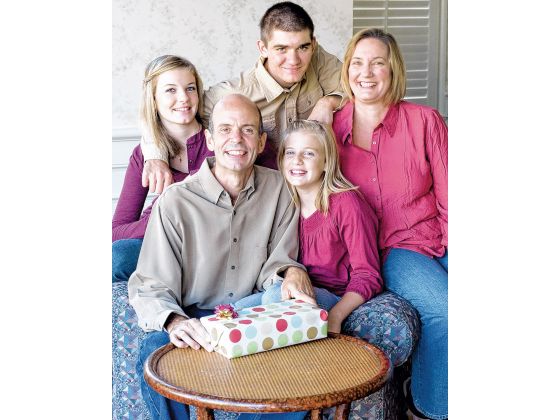 Jeff Mullis gained a new perspective on life after surviving stomach cancer in 2007.

Jacob Barringer returned to the football field to provide a positive spark for the Forestview Jaguars after having survived Burkitt’s Lymphoma in 2007.

Sharon Grammer dedicates her time to delivering Sunshine Boxes to chemotherapy patients on their first day of treatment after surviving primary peritoneal cancer in 2008.

The three Gaston County residents are among 12 cancer survivors featured in the 2011 “Stories of Survivorship” calendar published by the Presbyterian Buddy Kemp Cancer Support Center of Charlotte.

Joshua Stein, an assistant basketball coach at Belmont Abbey and a testicular cancer survivor since 2008, is also featured in the calendar.

Physicians, nurses and others involved with the cancer survivors at the hospital nominate patients to be in the calendars, which are given to all newly diagnosed patients at the Presbyterian Cancer Center.

Here’s a look at the local survivors in the calendar and how their lives have been changed by cancer.

In his first game in his first year playing football at Cramerton Middle School last year, Jacob Barringer broke his finger. Instead of staying on the sideline, he wrapped it up and got back in the game.

“I’ve always withstood pain really well,” said Barringer. “Going through treatment helped me withstand pain. If I went through that, I can go through anything else.”

When he was 11 years old, he was playing sandlot football with a friend when his vision started to blur. Symptoms eventually got so bad he couldn’t keep his eyes open.

He was diagnosed with stage four Burkitt’s Lymphoma, a lymphatic cancer that started in his neck and traveled to his brain before spreading to other organs, on Nov. 1, 2007 – one day after being checked into the hospital on Halloween.

“I was in a load of pain, unimaginable pain,” he said. “My parents were taken into this room and told the diagnosis. Mom had come into the room where I was and it seemed like God put the words in her mouth to tell me.

“I never had the thought of death come into my mind. I knew I was going to make it through.”

After aggressive chemotherapy that included “every chemo drug known to man and some not known to man,” he said, his doctors gave him a late present a few days after Christmas.

“They said they couldn’t find anything,” Barringer recalled. “Mom broke into tears. Dad’s a crier, too. They said they were going to continue chemotherapy to make sure there was a higher chance it wouldn’t come back.”

He lost his hair (“I had sweet, hair, I had the mullet,” he said) but not his spirit. He kept up with all of his schoolwork and kept his nurses in stitches with his sardonic wit.

After finishing his treatments in May 2008, he was told it would take at least a couple of years for him to get back up to speed. Five months later, he was back playing sports. Two years and a growth spurt later, he completed his first season playing linebacker for the Forestview Jaguars junior varsity football team.

“I’ve made it through this disease and I’m going to go somewhere with it because God saved me for a reason,” he said, “so I’m going to go through my life the best that I can because of that.”

On what is often the scariest, most difficult day for new cancer patients – the first day of chemotherapy treatment – Sharon Grammer provides them with a ray of sunshine.

Or rather, 15 individually wrapped rays of hope.

Grammer delivers Sunshine Boxes filled with gifts like quilts, chemo caps and scarf hats for newbie chemo patients at the Presbyterian Cancer Center. So far, she, her parents and others involved with Fighting Cancer Inc., the nonprofit she started to raise funds and awareness to fight the disease, have distributed 219 boxes since August 2009.

Those 3,285 gifts don’t include the gifts she gives to all new and old chemo patients getting treatment during the week of Christmas in what she calls “Project Elf.”

She tells folks to unwrap a present for days when they have chemo or whenever they’re feeling down.

“The boxes hopefully give them a little bit of support and encouragement,” Grammer said, “and let them know that sitting in that chair is not a death sentence.”

That’s the attitude she adopted after being diagnosed with stage four primary peritoneal cancer in December 2008. The survivor said your mental approach to the disease has a big impact on your recovery.

“I refused to say I had cancer because that was giving it too much power,” she said. “If I referred to it, I said ‘I’m fighting cancer.'”

She still is. She found out after Thanksgiving that there’s been a recurrence of her cancer. Talk to her for a few minutes and you’ll have no doubt that she’ll lick it again.

“I’m confident that I will beat it,” she said. “I know how to beat it. With everything I’ve been through, this will be a little blip. I’m going to fight it and get on with my life.”

Work used to keep Jeff Mullis too busy to be involved with church activities. As a technician who worked onsite at nuclear plants, he was constantly on the road.

But when his wife Rhonda asked him to go on a mission trip to Gulfport, Miss., with her in the summer of 2007, the father of three jumped at the opportunity.

It turned out to be just what he needed before being diagnosed in December 2007 with pseudomyxoma peritonei, a rare abdominal cancer.

“It changed my outlook on life,” said Mullis of the mission trip. “When I sit back and look and think about it, I wonder if all of this didn’t fall into place, would I have as good an attitude as I have now.

“Ever since the very first day I was diagnosed, I said to myself that I have to be positive through this whole thing. I said we’re going to fight this thing and hold our head high.”

He underwent major surgery in March 2008 and aggressive chemotherapy. He’s also had 10 organs removed from his body since the initial diagnosis.

“I always tell people it’s amazing what you can live without,” he said. “But you can’t give up. You just have to keep on.”

His cancer may have forced him to cut his career short, but he said it’s given him greater perspective of what’s important in life. He’s adopted the “Mr. Mom” role at home, driving the kids to school and taking care of the house.

“Working at my job 12 hours a day was a whole lot easier,” he said. “But being here with my kids and being able to spend time with them means a lot.”

His cancer returned in early 2009; he started his second round of chemotherapy since the recurrence in October.

“It won’t ever go away,” he said. “We know we have to go through this and it’s just part of the process and part of our life now.”

Still, he refuses to mope around the house or wallow in self-pity. Instead, he continues to fight his cancer with a quiet dignity that’s served as an inspiration to his family, his doctors and nurses and other cancer patients.

“When this happened, I kept more to myself,” he said. “Since then, I’ve opened up. It’s like I don’t meet a stranger anymore. Just knowing every day I have the love and support I have, especially from my wife – she’s been absolutely wonderful through this whole ordeal – I feel better now than I did in years.”