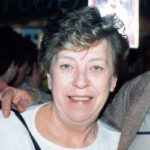 Jeanne was the beloved wife of the late Paul J. Mullis Sr., retired Medford Police Officer, and the loving mother of Kathleen E. Sullivan and husband William, Paul J. Mullis Jr and wife Donna, Brian M. Mullis and wife Kathleen, Robert T. Mullis and wife Angela all of Marshfield, Mary A. Bonner and husband Donald, Elaine A. Ford and husband Brian and Jeanne E. Bandoian and husband Philip all of Medford, Claudia R. MacNeil and husband John of Woburn. Sister of Mary Malatesta of FL and the late John, Alexander, Douglas, Ronald, Richard Treem, Hilda O’Farrell and Olive MacDonald. Jeanne was the grandmother of 21 and the great grandmother of 9.

The funeral procession will be held from the George L. Doherty Funeral Home, 855 Broadway (Powder House Sq.) in Somerville on Wednesday morning, March 28, 2012, at 10 a.m. followed by a Funeral Mass in St. Joseph Church in Medford at 11 o’clock. Relatives and friends are invited. Calling hours will be held on Tuesday, March 27, from 4-8 p.m. Interment will be at Oak Grove Cemetery in Medford.