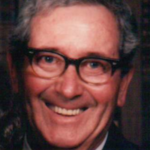 Jim was born in Ocala, FL on July 19, 1924 to the late James Sr. and Bartha McBride. He is also preceded in death by his brothers, Thomas and John McBride; sisters, Dorothy Moore and Betty Simpson.

Funeral services to celebrate his life will be held at Heritage Funeral Home, Indian Trail Chapel on Thursday, October 20, 2011 at 1:00P.M. The family will begin to receive friends at noon. Burial will follow with full military honors at Sharon Memorial Park.

Jim served in the Army during the Philippines Campaign and Occupation of Japan.

The family would like to thank the staff of Hospice: Nancy, Kim, Pat and others for their support during this difficult time. In lieu of flowers, memorial contributions may be made to Hospice of Union County.

Arrangements are in care of Heritage Funeral Home, Indian Trail Chapel. An online guest registry is available at www.heritagefuneral.net.